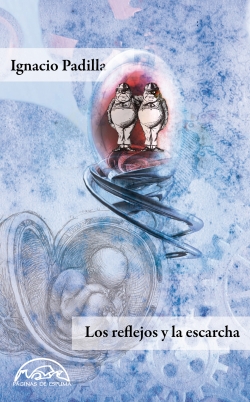 Year: 2014
Editorial: Páginas de Espuma
Collection: Voces / Literatura
Literary Category: tales
Language: Español, Catalán
ISBN: 9789688679319
Format: Paperback with flaps
Pages: 136
Synopsis: Brothers, comrades, brotherhood. Tormented brothers and brothers disowned by their brothers. Comrades in arms and seditions betrayed by their century. Incestuous brothers, ruined, violated by love or resentment. Artificial families and unavoidable exiles to solidarity due to one’s own or someone else’s catastrophes. Imposters and doubles of their own chimeras. Fratricides without regrets or redemption. From the brothers who obtained benefits with a headless chicken to the survivors of a battle plagued of opprobrious secrets, between the circles of hell and terrorist cells, Reflections and Frost rends and strips bare the myths of fraternities between men from the very moment Cain murdered Abel.

The following has been said of Ignacio Padilla: “Ignacio Padilla represents continuity and consolidation of Spanish literature. He says what cannot be said any other way: the heart has its reasons which reason does not know. It’s Pascal’s constant lesson and no one has understood it better than Ignacio Padilla.” Carlos Fuentes. “An author with exceptional skills.” Barry Unsworth, the New York Times Book Review.