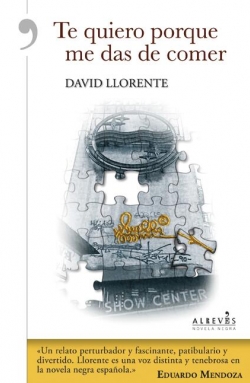 Maximiliano Luminaria was a quiet boy. If he was happy or sad about something, he always kept it to himself. He received the highest grades on the college entrance exams and decided to study medicine. Maximiliano always received the best grades, he was the best during practices and the best in the operating room. When it came right down to it, all of the hospitals  wanted him. There has never been a more precise surgeon or a more beloved neighbor for the habitants of Carabanchel. Everyone greeted him in the street and thanked him. All had a family member that Doctor Maximiliano Luminaria had saved.

His other life… (Which is his real life and which is the false?), it was all a bit different, or not…Repeating on the street what he does in the O.R. doesn’t involve great difference.

For many years a serial killer has been threatening the neighborhood of Carabanchel. All of the victims are left with a coin placed under the corpse. There is never a clue left behind. Every murder- according to Casimiro Balcells, the detective in charge of the investigation- is a fucking work of art.

However, there are several victims that are never discovered. The Coin Killer has a particular liking for meat. He likes it tender and rare.

"A disturbing and fascinating novel, harrowing and funny. Llorente is a distinct and gloomy voice in Spanish crime fiction" Eduardo Mendoza

"David Llorente's paragraphs are syntatic juggles in which the novelist tries to leave the reader breathless and succeds." Care Santos