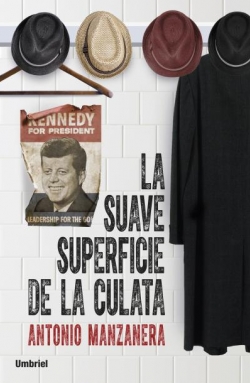 Year: 2013
Editorial: Umbriel
Collection: Umbriel thriller
Literary Category: police, black and suspense
Language: Español, Catalán
ISBN: 978-84-92915-38-5
Format: Paperback with flaps
Pages: 320
Synopsis: Accused of murder, Vincenzo Santino, capo of a Mafiosi family is condemned to fifteen years in jail. However, to his surprise, shortly thereafter he is released on probation by the Department of Justice run by Bobby Kennedy, Attorney General and declared enemy of the mafia.

It won’t be long before Santino discovers that, behind his apparent stroke of luck, hides a plot between the Cosa Nostra and the CIA to assassinate Fidel Castro, and that he is to be in charge of carrying it out. But, no sooner is he out of jail, a startling intrigue of drug trafficking, secret services and organized crime will drag him into a never-ending spiral which will result in one of the most unpreventable enigmas in recent history: the assassination of John Fitzgerald Kennedy.