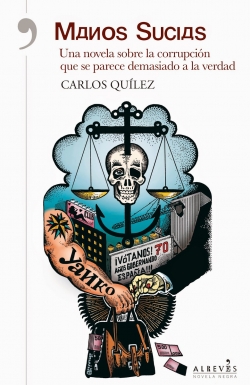 Year: 2014
Editorial: Alrevés
Language: Español, Catalán
ISBN: 9788415900825
Format: Paperback with flaps
Dimensions: 15x23
Pages: 256
Synopsis: That all that shines in this country is not gold we know full well, and that a good portion of the political class lives off the fat of the land, we also know. Moreover, we are starting to know the tip of the iceberg, but we ignore the bowels of a State that rots by the day, pillaged by spurious interests, and very often colluding with important financial structures, political parties and public power.

Adreu García, of the Mossos d’Esquadra; Inspector Pardina, of the CNP (National Police Force); Sergeant Vilches, of the Civil Guard, and the well-known journalist Patricia Bucana organize what will be greatest anticorruption raid in history, which will imply exposing their lives and face the powers that be, tangled in a plot that grows at a furious pace thanks to the magnitude of this imperative police investigation: bad guys must to be caught red-handed.

In the end, and in the case of Carlos Quílez, one of the leading investigative journalist of our time, the question is non-other than this: and if the novel were the only free place left to tell that which cannot be said, no matter how incredible it sounds? Which the author answers with expert hand, persuasive and veteran, bolstering the framework of this new genre, the non-fiction novel, in an end to disguise reality—or was it the other way round?—and turn into literature.