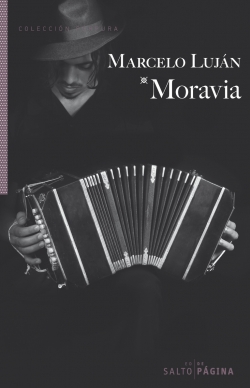 Year: 2017
Editorial: Salto de Página
Literary Category: police, black and suspense
ISBN: 9788416148509
Pages: 176
Synopsis: Argentina, February 1950. Juan Kosic—now consecrated and famous bandoneon—returns to his native country fifteen years after having left. He is accompanied by his wife and his small daughter. Without revealing his identity, they show up at the pension that his mother runs for the last forty years in the Colonia Buen Respiro, a village lost in the middle of the Pampa.  For Juan Kosic the eager return has only one purpose: prove to his mother that he succeeded in the profession that she refused him and which was the reason behind their forced separation.

Rich in a village of peasants with little means, elegant and pompous, full of the arrogance that only resentment generates, the bandoneon ignores all the warnings of his wife and doesn’t cease to work on the scheme that he has been planning for years: to poke fun of those who did not have faith in him or his artistic talent. But an irreversible and catastrophic event will take this story on a tragic detour. With the narrative unanimously acclaimed by critics, Luján reflects on the risks of imposture and the destructive power of the human being all while, as in Greek tragedies, hubris and ambition push the characters toward a dramatic denouement.