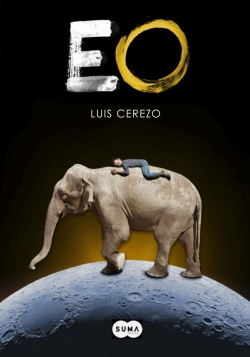 Year: 2015
Editorial: Suma de Letras
Literary Category: contemporary fiction
Language: Español, Catalán
Synopsis: Pedro is a ten-year-old coming from a broken family with an absent father. He lives with his mother Susana in a poor neighborhood of the city, next to the river. She works double shifts at the bar, while her unmotivated son Pedro goes to school. He spends his time at home watching television and playing video games. One day, while he is walking along the reed bed on the outskirtsof the city, Pedro finds an elephant (Eo) that has escaped from the circus. The stunning discovery will endow Pedro with a renewed curiosity and will enhance his child stimuli. Instead of letting everyone know about Eo, he will keep his new friend as a secret – except from his mother, although she cannot or will not listen to him.

The elephant will remain hidden in the wetland, away from the dangerous adults. Thanks to Eo, Pedro will learn about bein gresponsible, organized and determined. He will discover the value of friendship and loyalty, but he will also learn how to avoid danger and make hard decisions. Thanks to the elephant, Pedro will learn to grow up.

But the day Eo is discovered, the police, the neighbors and the media can only see him as the shadow of a monstrous threat. A public danger that must be eradicated.Sadly, Eo will be hunted by everybody. In an act of desperation, Pedro will run away astride the elephant. But his plan won’t last for long. The police cordon will gradually close in on the elephant, putting the kid’s life and his dream of keeping his friend forever in danger.