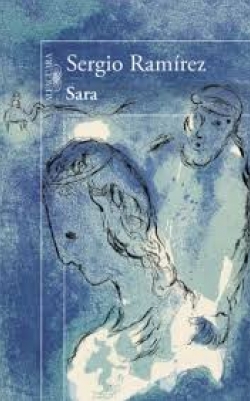 Year: 2015
Editorial: Alfaguara
Literary Category: myths, legends and sagas
Synopsis: “It was the first time the Magician addressed her. He had finally spoken to her, from out of his own mouth, or through the youth’s mouth. Wasn’t that a success? Even it were at the expense of his cholera, it had made him yield. Laughter is good for something, he thought, and he again laughed in-between his teeth, making sure that no one heard him this time around.”

The story of Sara and Abraham is that of a pilgrimage through hostile kingdoms and inhospitable lands, following the arbitrary indications that are relayed to Abraham and Sara by the Magician, a multiform character who does not seem to like laughter. In spite of the fact that generation upon generation believed that this was a story embodied by men, when in truth it is Sara who endows it with authenticity. Sara with her irony, incredulity, perseverance and ability to call into question the divine designs that no one else is ready to contravene.

With the pace of one of those stories told by the fire’s warmth, Sergio Ramírez in this novel builds a brilliant divertimento from a character taken out of the Bible but garbed in the attire of the most current feminine sensitivity. The tale of the intelligent rebelliousness of a woman who decides to take the reins of her life till she is able to fulfill her greatest longing (being a mother), and preserve it above all else.