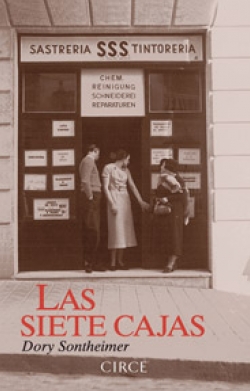 Year: 2014
Literary Category: history, literary theory and criticism
Language: Español, Catalán
ISBN: 9788477653004
Format: Paperback with flaps
Pages: 312
Synopsis: The Discovery of an identity and an unknown and dramatic past. The author of this book was born in Barcelona and was educated as a catholic in Franco’s Roman Apostolic Spain. Many years later, after the long sickness and death of her mother, Dory Sontheimer discovers, in her home’s attic, the seven boxes that reveal an identity and a past as unknown as it is dramatic. Putting order to this emerging legacy, composed of photographs, letters, passports and other documents, Sontheimer pieces together the story of her family. For twelve years, and moved by a mixture of fascination, curiosity and a sense of duty, she comes to the end of an investigation that will take her to Germany, Israel, the United States, Canada and the Czech Republic. And this manner she will follow the trail of one of the many families which were victims of the industrialized mass killing of Jews. Preventively sheltered in Barcelona and fleeing from the ravages of Nazism, Dory’s parents began a new life that forced them to deny their origin and adopt a new language, name, creed and a trade that was not their own.

This moving testimony, that alternates the documentary worthiness with the bright sincerity of its author, dissects the most domestic aspects of the drama lived by its victims, and attests to the pain and the guilt felt by a number of survivors who had to adapt themselves to their condition of exiles or outcasts and to bury beneath the gravestone of silence the thundering truths of their past. Without displays of rhetoric, Dory Sontheimer has written a story that, from a painful treasure that emerges from oblivion, she documents the life of the Jewish refugees in Spain. Responding to the foresight of those who left this testament behind in the form of seven boxes, she manages for the family members to finally overcome the ignorance and the distance imposed by the tragedy discover themselves with an emotion that the reader shares till the last word.