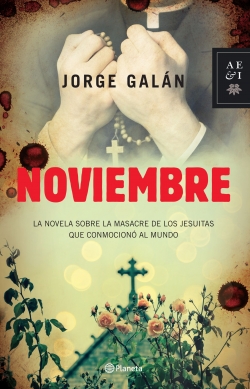 Year: 2015
Editorial: Planeta México
Literary Category: contemporary fiction
Published at: Psichogios (Greece), Tusquets (Spain)
Synopsis: 1989. Salvadorian society is immersed in the horror of civil war. On a fateful November dawn, a group of armed men penetrates into the premises of the Universidad Católica and murder in cold blood six Jesuits and two women. Father Tojeira is forced by the circumstances to take the reins of the Society in those sinister days of the massacre, with the wish and the duty to uncover the truth that lies at the bottom of these deaths. However, the only witness that could be of any help to resolve the case is silenced by the authorities. Who are the real culprits of this terrible slaughter? Inspired on the tragic events that shook El Salvador and Latin America, “November” is a moving and unsettling novel on fear, hate and impunity.

A book that casts some light for the very first time on the events that took place in 1989, and were never solved, as well as to delve into other crimes, such as that of Monsignor Romero. A claim to raise one’s voice, as the murdered Jesuits had done, in the defense of disadvantaged.