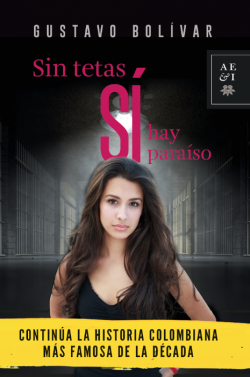 Year: 2015
Literary Category: contemporary fiction
Language: Español, Catalán
ISBN: 9789584246707
Pages: 283
Synopsis: Sin tetas sí hay paraíso is the second part of one of the most well-known Colombian novels in the world, translated to various languages and brought to the movie screen, the theatre, and to the television for producers in Colombia, Mexico, Spain, Italy, and the United States. The author was obliged to wait fourteen years to write the second part, so as not to transgress the natural ages of the protagonists. The third and last part of the trilogy will be published in 2016.

Millions of readers and spectators believed that the death of Catalina would put an end to the familiar tragedy. But it didn’t go that way. Her sister was born, fruit of the prohibited love between her mother and her boyfriend. The same calling as her sister’s will weigh on the shoulders of the little one, as will succeeding in life without the need to shame and alter her body in seeking to fit into the aesthetic of the drug traffickers.

So that the girl doesn’t jump out of their hands, in the difficult environment in which she will grow up, her parents will separate her from reality, painting a yellow line on the floor in the entrance of their house, which will prevent her from knowing the real world. They will manage to restrict her freedom with a dangerous premise: “If you cross this line, there will be tragedy, death, and destruction.”

It’s such that the obsession of Miss Hilda to not let her be contaminated by the outside world arrives to the extreme of ordering groceries by telephone, not imagining the love that would arrive at her door disguised as a messenger. Catalina falls in love with Hernán Darío, the boy that earns his living as delivery boy. But not just her. Daniela, the daughter of Yésica, The Devil, who now is a powerful and millionaire criminal that inherited money from Marcial, the drug dealer extradited to the United States, is also in love with the delivery boy, and between them a rivalry will be born that will go from innocence to catastrophe.