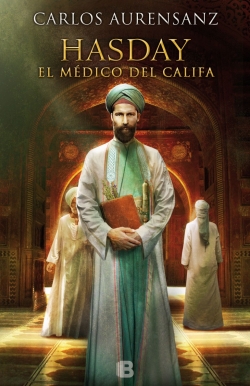 Year: 2016
Editorial: Ediciones B
Literary Category: historical fiction
ISBN: 9788466658461
Format: Hardcover
Pages: 669
Synopsis: Year 924. Hasdai ibn Shaprut is only a thirteen-year old kid, sharp, precocious and eager to understand the world that surrounds him. So much so that it won’t be long before he transgresses the strict social and religious norms that limit his thirst for knowledge.

A Jewish adolescent in a Muslim Madinah, son to a prosperous merchant and with a strong personality, he will soon discover that he won’t be short of enemies.

There are three common threads to the plot: a Jewish slave girl for which Hasdai is capable of betraying his father’s trust; a dogged enmity that will follow him throughout life, and a book, the precious copy of an ancient medical compendium, “The Treaty of the Simple”, that could very well be the title of this novel.

“The Caliph’s Doctor” is a story of discoveries in an exciting period, the beginning of the splendor of the Cordoba of Abd-ar-Rahman III, which Hasdai will have the opportunity to live along with its creators.

Traders, libraries, translators, the Madrasa and the Bimaristan, embassies and bellicose conflicts, scientific discoveries, the construction of the Medina Azahara… are some of the brushstrokes that complete the fresco of an Al Ándalus in its period of splendor, when Cordoba became the light that lit the Western World.