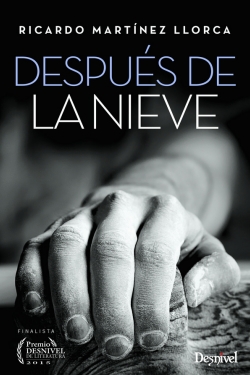 Year: 2016
Editorial: Desnivel
Literary Category: travel literature
Language: Español, Catalán
ISBN: 9788498293487
Format: Paperback with flaps
Pages: 96
Published at: España
Synopsis: The narrator, a journalist who has worked developing profiles of men devoted to adventure, is faced with a threat up until now unknown to him. On this occasion, he by chance meets Carlos Marín in the city, Marín is an integral mountain climber that never managed to become a legend, but is among the most respected, and who has been missing for some time now in the mountaineering world.

For unknown reasons, Carlos has decided to live as a homeless, someone who sleeps in vacant lots and on the pavement and who survives on energy bars. And it is in the streets where he meets Burkina, the immigrant, and Muchacho. Different motives have pushed them to this battered life. Carlos’s need to pass through a phase that one could call expiation is also suspected. For some strange reason, which the narrator decides to discover, life has brought him to the center and the outskirts of a neurotic and dark city, far from the landscapes in which he feels alive, far from his passion.

Little by little, through various encounters with Laura, a young prostitute, and with Carlos, the narrator uncovers the life of the character: his childhood bound to a tyrannical first born child; his adolescence, lived with the clear objective of throwing himself into the free air of adventure; his first dabbling in the mountain; his marriage, his encounters with John Bachar, Alex Honnold, Alex Huber, Alain Robert, Catherine Destivelle, the Pou brothers, etc.

Written in a crossover between a newspaper column and a profile composition, Después de la nieve is a novel in which the language permits literary licenses to give more color to the storyline, to the descriptions, to the feelings of the characters. At the time that the narrator discloses the past and the present of the protagonist, the intrigue grows due to the reasons for his decision. As in the classics of literature, the work is not held up by any type of plot, but by the conflict.