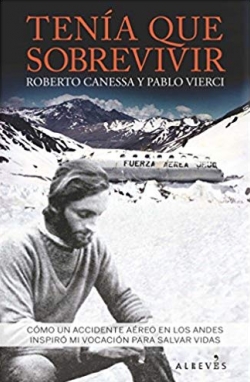 A nineteen year-old pre-med student and rugby player boards a plane with some 40 other passengers, fellow teammates with various members of their families, bound for a sports competition in Chile in October 1972.  In the middle of the flight, in one of the most uninhabitable stretches of the Andes, the plane crashes.  After a prolonged search, the passengers and crew are given up for dead. After all, it is late October and, with subzero temperatures and the worst of the winter winds and snows already underway, survival in those mountains would be nothing short of a miracle.

Seventy-two days later, two young men, aged 19 and 22, walk out of those mountains alive.  One of them is that pre-med student named Roberto Canessa.  When the youths arrive at a village, no one believes where they say they have descended from.  Finally they convince the authorities to return with them, and when the search party arrives on horseback, they discover the impossible: 14 other survivors, for whom Roberto had become, by necessity, a doctor on the mountain. For the young aspiring doctor, his ordeal on that mountain would serve as inspiration for his future.  Out of a series of near-death experiences, including a perilous physical journey, Roberto Canessa would forge a powerful spiritual core. He had been granted a miraculous gift: endurance despite the odds, and a profound awareness of the inherent preciousness of life, no matter how dire its immediate or long-term prognosis.

The fame that followed his trek out of the mountains resulted in his becoming an international celebrity, a sort of global folk hero.  But Canessa ended up feeling not like a hero, but rather someone who had a great debt to pay.  He devoted his career to providing others with a second chance, just as he had been given in the Andes.