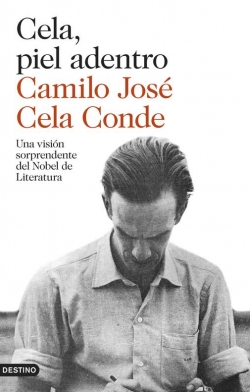 Year: 2016
Editorial: Destino
Literary Category: tales
Language: Español, Catalán
ISBN: 9788423350902
Format: Paperback with flaps
Pages: 250
Synopsis: In Cela, piel adentro, the son of the Nobel Prize winner manages to create a portrait that is both literary and personal of Camilo José Cela, undoubtedly one of the crucial figures that Spanish literature produced in the twentieth century. In what is the best homage and account from he who was dreaming since his youth of the Nobel Prize of Literature, Cela Conde reviews the life of his father, the man who was to him, above all, a brilliant adventurer.

The synthesis, or better, the contrast between the previous book, Cela mi padre, and the letters that were exchanged between Camilo José Cela and his wife Rosario Conde, bring us to the discovery of an incredible and surprising figure, completely different to the Cela that received the Nobel Prize.

This book portrays the author of La Colmena and La familia de Pasual Duarte as a closer and more familiar figure. No one better than his only son to tell us how he behaved in private company, how he acted, how he enjoyed himself, or how he thought. With a great sense of humor, as honest as critical, he tells us of the frantic life of the family in Madrid, the summer holidays in Cebreros, the constant moves in Mallorca, surprising episodes and anecdotes. A trip, in short, to the true nature of the magnificent writer.