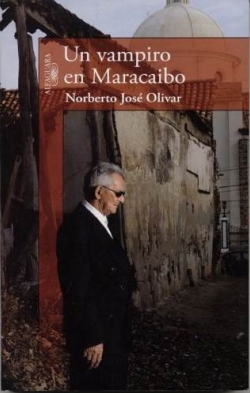 Year: 2008
Editorial: Alfaguara / Ediciones B
Literary Category: police, black and suspense
Language: Español, Catalán
Pages: 256
Synopsis: “A Vampire in Maracaibo (Alfaguara, Premio de la Crítica a la novela 2008 and Premio Municipal de Novela 2010), which will reedited by Ediciones B, Venezuela in 2016 as “A Vampire in the Lake”.

A neurotic professor is behind the scent of a man obsessed with dinking blood to achieve eternal life: a vampire that haunts the hot city of Maracaibo, in Venezuela. A retired detective becomes his ally and best informer.

“A Vampire in the Lake” is not worried with genres and makes use of various registers: it takes on the detective novel, classical cinema, tabloid, the short story and added to all of this the author infuses terror and humoristic literature, in a fun and spectacular display of what a present-day writer can do with form without falling into empty secrecy and without turning his back on his readers.

In 2017, the movie will be released, starring Miguel Ángel Landa and directed by Cal Zitelmann, along an important part of the team that won the Golden Lion in the International Film Festival of Venice in 2015 for “From Beyond”.