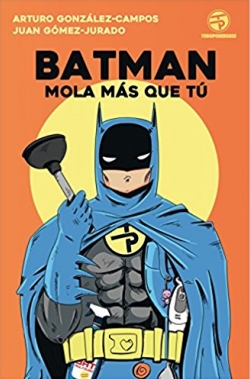 Year: 2017
Editorial: Minotauro
Literary Category: science fiction
Language: Español, Catalán
ISBN: 9788445004562
Pages: 207
Synopsis: 75 years after the debut of Batman and much has changed for the bat since the 1960’s image of the man with the beer belly dressed by his mother for a school function. Beneath this image is a hidden character that is ambiguous, neurotic, unhealthily obsessive and marked by the assassination of his parents. A lunatic who does the right thing. A knight in shining armor that tries to stop the city’s sea of crime with his own two hands.

If you don’t know that Batman matters less than Bruce Wayne, that his punches matter less than his brains, that his bat-gadgets matter less than his intentions to control the inner rage that makes his put on his suit, you are lucky to have the possibility of getting to know one of the most fascinating characters in history right in front of you. If you haven’t reread a Batman comic since you were little, you don’t know that Batman is cooler than you and almost even cooler than us.

In this book you will learn all the things that those who just know Batman from the shirts should know about the Dark Knight.