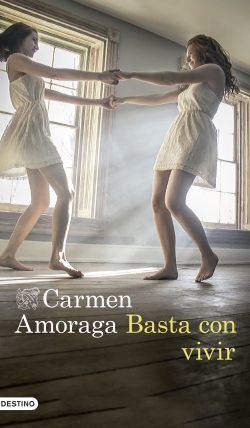 Year: 2017
Editorial: Destino
Language: Español, Catalán
Format: Paperback with flaps
Pages: 320
Synopsis: Pepa is a mature woman that has spent much of her lifetime looking after her mother and who widowed prematurely and subsequently fell into a great depression. She gave up her job so to take even better care of her mother, but has now overcome her depression and is rebuilding her life. However, she believes she has missed her train. Her employers do not readmit her as promised and is faced with no other choice than to work in old folk’s home as a care provider. She feels frustrated, thinks that she has wasted her life and an armor full of sorrow prevents her from being happy.

During a compulsory holiday, Pepa is forced to reflect and take stock of the mistakes that have taken her where she is. Concurrently, an old friend brings to her attention Crina, a young pregnant Rumanian woman on a bench on the plaza, who does not speak a word of Spanish.

Crina arrived in Spain deceived by a ring of sex slaves that has forced her into prostitution and now, about to give birth, does not “work” and is more or less looked after because this network plans on selling the baby. Pepa slowly approaches her, finds out her story and decides to bend backwards to help her.

An intense novel that speaks to us about growth, overcoming and resilience. That shows us the truth of what we are and how helping others can be our own salvation. A rhapsody to life and to the strength of solidarity between women