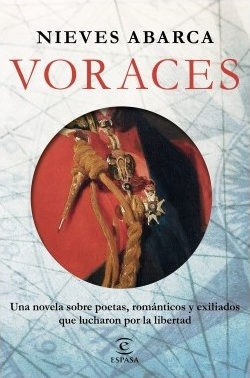 A novel about poets, romantics and exiles who fought for freedom

La Coruña, 1854. The arrival of a strange ship triggers a cholera epidemic in the city. Juana de Vega, widow of General Espoz y Mina, hero of the War of Independence and passionate liberal, is one of the few people who can face the disease's virulence and tackle devastation and death. Juana has lived through this situation before and knows that with cholera there is another epidemic, something even darker and more dangerous that has arrived on the ship and that only she knows.

London, 1831. The Spanish liberals survive as best they can there, beset by royalist spies. In the wake of his beloved, Teresa Mancha, and fleeing the repression of King Felon, José de Espronceda meets Generals Espoz y Mina and José María Torrijos, obsessed with Spain's freedom and willing to risk their lives to put an end to absolutism. Both have the support and collaboration of their wives, Juana de Vega and Carlota Álvarez de Torrijos.

Both plots come together in an ending in which the yearning for freedom and the thirst for blood will compete to win a deadly battle to in which romanticism will be the true protagonist.