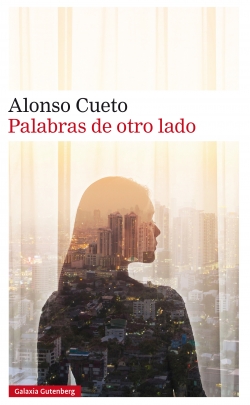 Aurora is a young thirty-year-old lawyer who lives in Lima. She is a successful professional and leads a peaceful life.

At the start of this novel—after the secret that her mother reveals on her deathbed—she suddenly finds herself on the edge of a precipice. She discovers that her father is a Spaniard living in Madrid and, after some initial hesitations, decides to travel in search of him. Throughout her journey in a city that she does not know, she runs into a series of characters. Carlos, Nuria, Paco, Luis and others will accompany her on a day of personal revelations and substitutions of the past. Set in Madrid and Barcelona, the novel follows the exploration of this young woman in the labyrinths of her identity. Gradually, as she approaches the truth as to who her father is and who she is, she recognizes a ghost from her past.

Provided with humor, suspense and language that delves into the characters’ unconscious, “Words from Elsewhere” is a story of our time. Aurora is Latin American, Peruvian and also Spanish. She is young, while at the same time is overwhelmed by her past. She is a migrant who did not realize it. Many stories and secretes run through her blood, from different cultures and countries. All the characters she meets in Spain, migrants by vocation and by necessity, recognize her as one of their own. Traveler who walks firmly and gropingly, Aurora will discover, however, towards the end of the novel, that her father is someone quite different from who she expected.