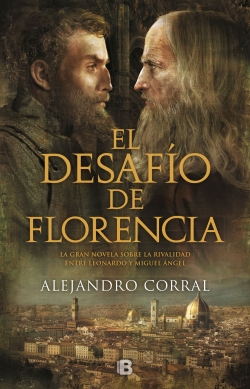 At the beginning of the sixteenth century Leonardo da Vinci and Michelangelo coincide for a period of time in the city of Florence, where the former is painting the Mona Lisa and the latter plans to pull off a formidable coup. Immersed in a tumultuous personal relationship, they compete to obtain the concession to a huge block of marble in which only Michelangelo sees his David.

The greatest artistic duel in the history of Art

The rivalry of the two artists reaches its zenith when the Lordship of Florence decides to commission both the painting of two murals, facing each other, in the most em-blematic hall of the Vecchio palace.

A city that was a world.

The two geniuses of the Renaissance face each other in a colossal challenge orchestrated by the intelligent Machiavelli. A battle between two opposing souls, dazzling and tor-mented, that fought the most prodigious of battles: a battle that will lead one of them to win the absolute favor of Florence which had been ruled by the powerful Medici.