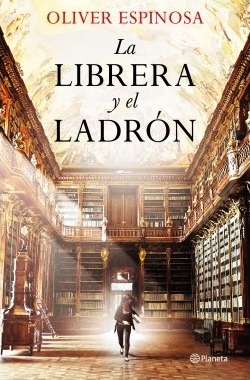 Love and adventure in the magical world of codex collectors.Laura Loire is an antiquarian bookseller who is about sell a manuscript of the Inferno of the Dante's Divine Comedy, with which she hopes to save her business. When the deal is about to go down, she realizes that the incunabula has been stolen and replaced by a crude copy. She is convinced that Pol, her ex-boyfriend, a white-collar thief, is involved.However, shortly thereafter she discovers that he is on the passenger list of a plane wreck in Barajas and has perished.The loss of Pol makes both she and Marcos, the old mentor of the young man in the world of bibliophile, reminisce about Pol and we learn of the difficult relationship between the bookseller and the thief, all while the former is busy trying to find out what has happened to her manuscript, which belonged to her family.A mysterious man then appears on the scene who demands that Laura hand over a handwritten notebook of Einstein's, which contains dangerous information, in return for her missing Inferno manuscript. This will force the entire plot toward a frantic resolution, one which is strewn with all sorts of surprises, for what no one knows is that the missing incunable hides an amazing secret.A gripping novel full of action and adventure, and littered with wisdom and revelations, whichbrings us closer to a fascinating world, that of the collectors of ancient books that cover periods and places.