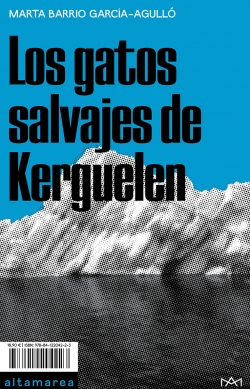 A group of young researchers travel to the Desolation Islands, to record the effects of climate change on the fauna and flora. It is a treacherous territory, completely isolated from civilization and ravaged by hurricane-force winds, where countless tragedies and shipwrecks have occurred ever since they were first discovery in 1772. Forced into a digital curfew, the scientists will be pitted against themselves in an icy and ruthless south. And, while studying the signs that predict the arrival of the end of the world as we know it, they will witness a series of mysterious disappearances, whilst on the horizon the icebergs appear intimidating, displaying unexpected pulsations from within them.

• A page turner from the very start. Multiple murders are committed. “Without punishment there is no crime,” the main character says on several occasions through-out the book.

• Global warming is inversely proportional to the moral cooling of this novel's protagonists.

• A book not only for lovers of mystery, but also of travel literature.

• Ingenious narrative rhythm. The action is interspersed with magnificent descriptions of Antarctica, its fauna as well as ancient or more recent shipwrecks that occurred on those islands.