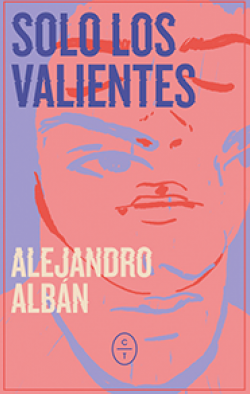 Little Alejandro knows that he is a boy and that he prefers Zorro's costume to that of a princess since long before he was called Alejandro. It will take twenty years, many complicated conversations, some weeping and several injections of testosterone for him to have his new birth certificate in his hands.

Young Alejandro knows that he is a writer long before publishing his first book. He writes, even if he begins to study medicine. He writes, even if he continues with the Psychiatry residency. He writes in his spare time, at work, in hiding, everywhere. It will take ten years, a literary workshop, several friends and a happy call from a publisher for him to have his own book in his hands: Only the Brave.

Can you be a man if society doesn't see you as such? Can one be a writer if no one knows? Can we be who we really are if we are alone? Who are we beyond the door of our room, of our body?

In this novel Alejandro Albán confesses his own transition, narrating with an excellent literary flight a story that can leave no one indifferent. Only the Brave is an autobiographical story that transcends its fiery theme to offer a universal reflection on identity, silence and the power of the written word.

“If everyone read this book, no one would argue about the rights of trans people. It is so painfully human that it can move even the most prejudiced people. And it describes so well the needed rebellion to conquer dreams, that reading it makes you want to live and fills one with euphoria. An extraordinary confession and literarily brilliant.” —Luisgé Martín