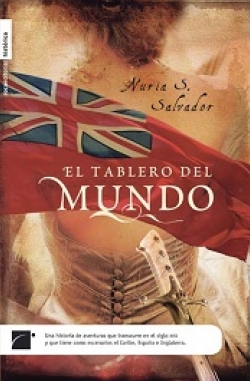 Year: 2008
Editorial: Roca Editorial
Language: Español, Catalán
Synopsis: Young Inés de Aranda leads a dream life in her Hacienda La Milagrosa, in the Spanish Jamaica of the 18th century. Youngest daughter of rich colonial family, she lives surround by slaves who attend to all her whims and wishes thinking only of marrying a rich and powerful young man. But one day, and in a few instants, her world comes apart when a fleet of English privateers invade the island and do away with all Spanish presence. Inés, surviving the assault, is forced to live using her inteligence and luck. She soon finds work with a rich English family, and to break with everything she invents a new identity becoming, Ann Peterson. But her past will always follow her, and Inés will find herself involved in a plot of treason and ambitions between the kingdoms of England and Spain. Love and the desire for vengence will force her to play a three way game in which there is only one winner, and the prize is the world.

A historical novel that blends adventure, romanticism and intrigue and takes back to the scenarios of the old colonial Europe.