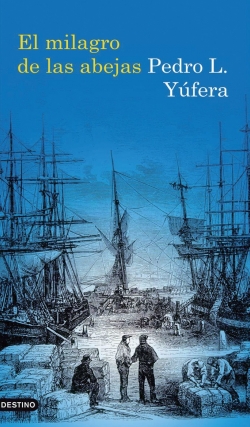 Year: 2010
Editorial: Ediciones Destino
Language: Español, Catalán
Synopsis: Carlos Jorquera, of a long line of lawyers, struggles between the grief caused by his father’s death (to whom he never showed enough affection), and the emotional pangs that assail his fortieth year, when he discovers of what seems to be a manuscript of a novel in the family home. The story carries him to a world that turns out to be as alien as it is breathtaking, since it narrates the adventures of an immigrant that sets sail, in the bustling Santander of 1885, to the no-less rough-and-tumble Mexico of the period.

Combining the enquires of the distressed lawyer to discover why his father has bequeathed that manuscript with the flashes of the mysterious and violent history of the emigrant to America at the turn of the nineteenth century, Pedro L. Yúfera offers us a suggestive first novel in which the painting of Valdés Leal “The Miracle of Bees”, missing since the time of the Napoleonic Wars, plays a decisive role.