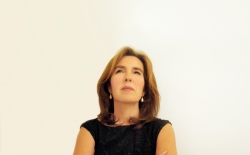 Reyes Calderón (Spain, 1961) is PhD in Economics and Philosophy, a professor and first vice-dean of the Faculty of Economics Sciences and Business at the University of Navarra. She is a visiting professor at the Sorbonne and at the University of Berkley, and centres her professional career focusing on good governance and anti-corruption. Columnist and habitual lecturer, she combines her academic work with writing. Reyes Calderón is author of Ego te absolve (Ego your Absolved), Gritos de independencia (Shouts of Independence), and Las lágrimas de Hemingway (Hemmingway’s Tears). Los crímenes del número primo (The Crimes of the Prime Numbers, RBA 2008. Rights acquired by Nord/Italy, Muza/Poland and Bertrand/Portugal) became a best seller with more than 50.000 sold copies in Spain. It is her first novel in which judge Lola McHor appears, followed by El expediente Canaima (The Canaima File, RBA 2009) and El último paciente del doctor Wilson (Dr. Wilson’s Last Patient, Planeta 2010).

After being awarded the Premio de Abogados de Novela for her book Jury Number 10, Reyes Calderón has established herself as an author of reference in the field of suspense literature, as the success amongst the public of her saga with Lola MacHor as the leading character attests; and, who once again returns in her novel Dispara a la luna (Shot at the moon) with greater strength than ever before.