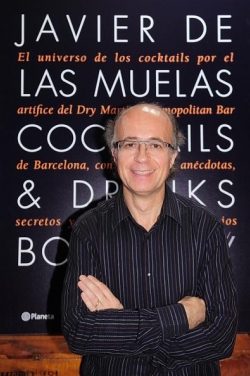 Entrepreneur and expert in cocktails, he began his business career in the hotel business in 1979, date in which the cocktail Bar Gimlet was created; the mythical bar of Rec Street in Barcelona, and which immediately turned into a place of reference for the city. Then came the opening of Gimlet in Santaló and afterwards bars such as the Nick Habana or Casa Fernandez, and also recreated places such as the brewery Montesquieu and the now legendary cocktail bar Dry Martin, created in 1978 by who has been its master, Pedro Carbonell. This last place, internationally recognized as one of the ten best bars in the world according to Tyler Brûlé, journalist and editor founder of the prestigious magazines Wallpaper y Monocle, since 2002 lodges in its establishment the clandestine restaurant Speakeasy, which pays homage to clandestine bars that opened during the Prohibition in the US, and to which Javier de las Muelas defines as his “factory of ideas”.

He takes part as a speaker in various professional meetings of the world of bars and cocktail lounges—amongst which stand out the Bar Show of London, the Barzone of Berlin, the Hotel Cavallieri Hilton of Rome, the Four Seasons of Tokyo, Madrid Fusion or the Bar Show of Amesterdam—and he usually carries out presentations and trainings.