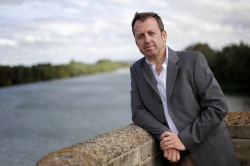 Carlos Aurensanz studied veterinary at the University of Zaragoza and works in the public health administration. He combines his profession with his passion for writing. His first novel was published in 2009, Banu Quasi, the first book of a trilogy that was followed by: The War of the Al Andalus (2009) and The Caliph’s hour (2013). In it, Aurensanz records three years of research and reading of the Muqtabis, a 1000-year Arab chronicle, in which the historian Ibn Hayyan retells, among other things, the fascinating events that took place in the author’s home town of Tudela (Navarra). After them, the author continues writing historical and suspense stories such as The painted Door (2015) and Hasday: The caliph's doctor (2016). King Tahúr (2018) is his latest book.