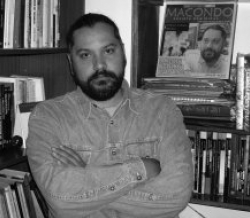 Was born in Barrancabermeja (Colombia) in 1967. His writing career began in 1967 with “Midnight Dreams” (1999). His second novel, El Eskimal y la Mariposa “The Eskimo and the Butterfly”, was awarded the Premio Nacional de Novela in 2004, and in 2005 it was reissued by Alfaguara. The critics considered it a “visceral and poetic x-ray of Colombian violence in the decade of the eighties and nineties of the last century.” Afterwards he published “Lara” (2007), a novel that deals the murder of the Colombian Minister of Justice, Rodrigo Lara Bonilla, which was translated into French and published by L’Atinoir of Marseille. In 2006, Nahum Montt published a biography of Miguel de Cervantes Saavedra, titled Versado en desdichas, “Versed in Wretchedness”.