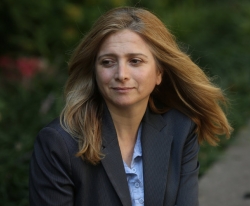 Samar Yazbek is an author, journalist, and scriptwriter for movies and television. She currently resides in Paris, exiled from Syria after opposing the Bashaar Al-Ashad regime. In 2011, she was detained and prevented from leaving the country. One year later, she was awarded the prestigious PEN/Pinter Prize "International Writer of Courage" for her book A Women in the Crossfire. In 2013 she recieved the Oxfam Novib/PEN award, which recognizes writers that are persecuted for carrying out their jobs. Samar Yazbek collaborates often with English-speaking medio like the The Dailty Mail and The Guardian writing about Syria.