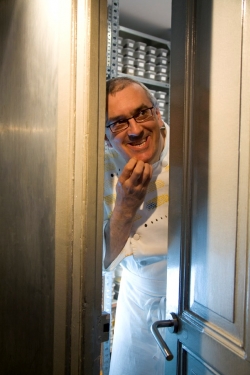 Xabier Gutiérrez (San Sebastián, 1960) is a chef, physiologist and writer. Since 1990, he has run the department of innovation at the Restaurant Arzak in San Sebastián, besides advising companies in the food sector and a frequent collaborator in different Medias and teaching courses in the Masters in Innovation and Management of Restaurants Program at the Basque Culinary Center.

He has published twelve cookbooks and five essays on culinary aesthetics. He has been awarded the Premio Nacional de Gastronomia and the Best World Cookbook Award. After publishing his first novel, The Aroma of Crime (Destino, 2015), Gutiérrez repeats settings and characters in the Bouquet of Fright, the second installment of the noir gastronomical series, with Deputy Police Inspector, Vicente Parra, as its main character.