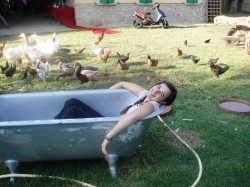 Author of “The Timeless Forest” (Cuadernos de Vigia, 2009) “A World without Words” (Valparaiso Ediciones, 2012), which received the prestigious Premio Rafael Pombo de Colombia on its centenary and “The Clouds’ Craft-Woman” (FCE, 2014), winner of the Premio Fundación Cuatrogatos 2016.

In the prologue of “The Timeless Forest”, Benjamín Prado claims that Sánchez’s poetry is of “a profound delicateness and has an exact knowledge of the symbolic power of writing.” Meanwhile, Luis García Montero has said about her that in her books one finds “the intelligence and the imagination of good literature.”

Some outstanding literary critics consider her one of the most promising voices of the New Spanish Children’s Literature.