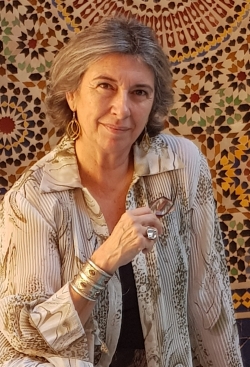 Yolanda Soler Onís, Spanish poet and novelist, is a PhD in Hispanic Philology and postgraduate in Business and Management of PYMES (small and medium-sized enterprises). Between 1986 and 1995 she was cultural manager and journalist in different media of the Canary Islands. Since then she has worked in the field of the dissemination of the Spanish language and culture, first for the Universidad Internacional Menéndez Pelayo and since 2005 at the Instituto Cervantes, as director of the Manchester, Warsaw and Marrakech offices, a task that was recognized in 2014 with the awarding of the Cruz de Oficial de la Orden del Mérito Civil (Cross of Officer of the Order of Civil Merit).

In 1986 she won the José Hierro de Poesía and Ciudad de La Laguna de Novela awards, with Sobre el ámbar (Regarding Amber) and Un tiempo de té con miel (A Tea Time with Honey), and in 2002 the Premio Tristana de Novela with Malpaís (Bad Country) (DVD, 2003), her first foray into the hardboiled novel by the hand of its character "Sindo Roca".

She has also published other poetry books, among which are Nombres ajenos (Other Names) (1989), Botania (1993), Mudanzas (Mooves) (2002) and De los ríos oscuros (Of Black Rivers) (2010); as well as the anthologies Memoria del agua (Memory of Water) (1997) and Memoria del agua y otros poemas (Memory of Water and other Poems) (2003). In 1995 the young-adult novel La cueva de Lezama (Lezama's Cave) was published. She is the author of different works related to the didactics of Language and Literature, such as José Hierro para niños (José Hierro for kids) (1998) José Hierro: Geografía Mítica (José Hierro: Mythical Geography) (2003) and José Hierro: La biografía de un pájaro se resume en su canto (José Hierro: A Bird's Biography is Resumed in its Song). Una poética confirmada (A confirmed poetics) (2017).