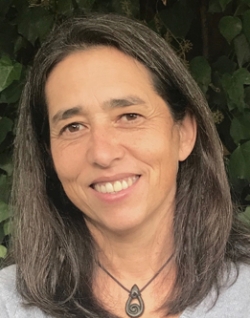 Paula Farias is a doctor, humanitarian worker, and a storyteller that threshes them out in, books, songs, and poems. After a few years sailing with Greenpeace, she began to work for Doctors Without Borders during the Balkan war, which later led her to coordinate emergencies in natural disasters, epidemics and armed conflicts, including the war in Kosovo, an experience that comes across in her first novel, "Let It Rain" (2005), which Fernando León de Aranoa would later make into a movie with the title "A Perfect Day", and which would win the Goya Award for Best Adapted Screenplay.

In 2004, she published the book of stories "Let Yourself be Told a Story", and in 2021, "Blue Ghosts", set in the war in Afghanistan. After presiding over Doctors Without Borders, she launched the rescue operations that the organization deployed in the Mediterranean to respond to a crisis that continues to this very day and which lurks beneath the pages of "Drift Skin".