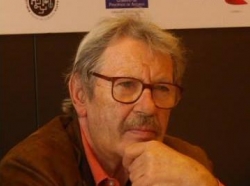 He is one of the most innovative and original writers in contemporary Spanish literature. Since his first novel, Cuando 900 mil Mach aprox (1975), which was awarded with the Premio de la Nueva Crítica, his literary works have always received the enthusiastic attention of the critics and the most demanding readers. Considered at the beginning of his literary career as an underground writer, his style has also been described as "psychedelic realism", "cybernetic conceptualism", and "precursor of cyberpunk".