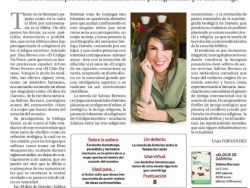 Soon it will be over two months since El dios de Darwin (Darwin's God), by Sabina Berman, was published, and the book has been receiving excellent reviews since then. Among them is the one that appeared in the Spanish newspaper La Razón a couple of weeks ago, in which Lluís Fernández wrote: "Berman's novel combines with expertise its distinct layers. (...) Masterful, at times. (...) Berman is a meticulous writer that avoids the magic realism of her previous novel and tries to experiment (...) A surprising thriller of theological intrigue". Sabina Berman, that presented El dios de Darwin in Madrid in an event in the Instituto de México the last 23rd of January, is among the nominees for the renowned International Impac Dublin Literary Award 2014 for her first novel The woman who dove into the heart of the world. The shortlist for the prize will be announced on the 9th of April, and the name of the winner will be made public on the 12th of june: we wish Sabina good luck and hope to continue to follow and enjoy her career as it develops.