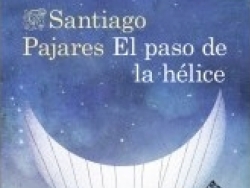 0
The story behind the story: "El paso de la hélice" by Santiago Pajares

Sometimes, the stories that books tell are not the only ones worth knowing; the stories behind them are also essential; the ones that explain their creation and their destinies.

The first one goes as far back as 2004, when Santiago Pajares was just 23 years old and Tabla Rasa published his first novel: the above mentioned. And, with this novel, a writer just starting his career together with a modest publishing house sold more than 4.000 copies of a work that became a sales success and a sensation amongst critics, and that earned Pajares the honour of receiving the Ministerio de Cultura's invitation to assist as Spain's representative to the European Festival for Novel Authors (held in Budapest in 2006).

But time went by and, with the closing of Tabla Rasa, El paso de la hélice fell into the shadows, and, with this, its first life ended.

The second, final life, began last year; it was then when the manuscript arrived at the office. And the experience of reading it can only be described with a single word: enchanting.

With the last lines still lingering in her mind, Antonia Kerrigan had made up her mind: this was an astounding piece of work, a manuscript that should be brought back to life and a new author for Antonia Kerrigan's agency.

And, with the unpolished text in hand and although the publishing rights still hadn’t been re-sold to any Spanish publishing house, Antonia decided to gamble on it in the Frankfurt Book Fair of October 2013. A proposition that was successful: Objetiva (Brazil), Rizzoli (Italy) and Libri (Hungary) all bought the publishing rights to El paso de la hélice. Shortly after that, Doing Publishing (China) and AST (Russia) joined that list, as well as Destino, the Spanish publishing house destined to give the book the second life it has always deserved.

Last week, after being edited by Destino, El paso de la hélice hit the stores again. And the ones that have previously read it, such as the journalist Celia Santos, can only praise it: "It had been a long time since a novel pulled me in as much as this one. It has that thing that many writers are looking for and very few have. It's a story written straight from the soul, but with unusual skill. A novel that seduces you at first, then makes you fall in love with it and finally captivates you. It deserves all the support it can get".

And here at the agency we're going to give the book this support; because Antonia believes in it; because Celia's words are precise; because, in its way, La hélice (which is, matter of fact, the book that all the characters in El paso de la hélice read) is going to seduce you; then, to make you fall in love with it and to captivate you in the end.

The name of its author you already know: Santiago Pajares.

And we have a feeling you're not going to forget it...