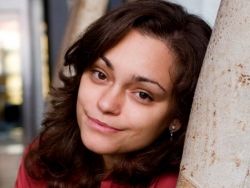 0
Laura Gallego and her novelties for the next season: "Encyclopedia of Idhun" and "All the Kingdom Fairies"

Laura Gallego has done nothing but grow in these last few years. A couple of them ago, she won the National Prize for Young Adult Narrative for her book Donde los árboles cantan (Where Trees Sing), and it seems she won't stop after achieving this high honour: she plans not one but two releases for the following nine months.

The first one, that will arrive on the 14th of October, is the Enciclopedia de Idhún (Encyclopedia of Idhún): it will be released by SM and includes all the information about the trilogy as well as many interesting additional data about Idhun's universe.

The second one is even more exciting: it's called Todas las hadas del reino (All The Kingdom Fairies) and it's Laura's new novel, which will be released by Montena on March 2015. Everything there is to know about the book is still a well kept secret, but there are some clues we can give you because Laura did so on her official webpage: it's a young adult novel; it occurs in a fairytale world; the name of its main character is Camelia; it won't have a sequel.

How good is that for an advance? Will it be enough until March 2015?

If the answer is no, don't worry: we'll keep you posted...