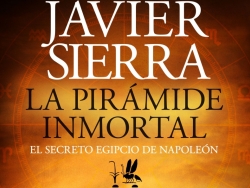 This story starts in 2001, when its protagonist, Javier Sierra, by then already a promising young journalist, turned 30 and decided to become a full time writer. He had his will, he had his previous works and he had a theme that had been obsessing him for a long time: death as our inescapable destiny. Where do we go when we leave life? What remains of us after we’re gone? Is there a tiny little chance of avoiding our destiny?

To deal with all these questions and write a novel that was just as profound as it was entertaining, Javier decided to set the action of his new work, which he planned to call The Immortal Pyramid, in ancient Egypt, a culture focused on death to which Giza’s pyramid acted as a symbol of the human will to transcend time. But Giza’s pyramid, as attractive a setting as it was, was not enough to catch the reader’s attention; so, exploring as he had been with fiction’s possibilities of dealing with History’s unsolved mysteries, Javier decided to use as a starting point something that had happened to Napoleon Bonaparte inside the pyramid. And, just as he did in The Master of El Prado, he linked the plot to a transforming personal experience he had in 1997, when he managed to spend a night inside the pyramid just like Napoleon had done centuries ago.

So, following a friend’s advice, he made the book’s subtitle (Napoleon’s Egyptian Secret) turn into the actual title. And Napoleon’s Egyptian Secret was published by La Esfera de los Libros, translated into eight languages and reissued many times but, somehow, placed between The Templar Doors and The Secret Supper, two of his most well-known titles, failed to get the attention it deserved.

Yet Javier Sierra always felt the book was worth a second life, just as the publishers in Planeta and we, here in Antonia Kerrigan Literary Agency, did. So, with the expert touch he had been developing throughout the years, he rewrote it, making it less dark, cutting out some of its characters, clarifying its plot; he renamed it, bringing The Immortal Pyramid title back; he turned it into a book that he asks readers to perceive as a novelty.

And we hope it happens that way; we really wish that The Immortal Pyramid reaches new readers. But the ones that have been following Javier Sierra’s career won’t be disappointed too: because this book is much more than a return to Napoleon’s Egyptian Secret; because here they’ll find all that made Sierra so popular: emotion, mysteries, big questions and unexpected answers. So, be ready to meet alchemists, sorcerers, dancers, old masters; prepare to be moved; save time for a book that you won’t be able to put down.

You’re welcome to Javier Sierra’s territory; we’re heading for Egypt in a couple of minutes. Estimated arrival for the 27th of August...