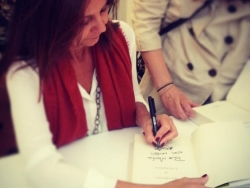 Yesterday Barcelona celebrated it's well known Sant Jordi. The day of books and roses. La Templanza by María Dueñas was the number one bestseller with long queues of people waiting to get the book signed by the author.

La Templanza, published in March by Planeta, was number one on the lists in Spain a few days after publication. Three weeks later, it is still number one.

After the international success of her first novel El tiempo entre costuras (translated into 35 languages) and her second book, Misión olvido, Maria Dueñas's La Templanza, pitched as a Spanish Gone with the Wind set in Mexico City, Havana, and Spain's Jerez de la Frontera, with the outbreak of the American civil war and a chance game of billiards providing the twin catalysts for a war of the sexes between a financially ruined Mexican silver baron and a wily, married Andalusian heiress over title to the eponymous vineyard estate of the novel, who too soon discover that sherry wine may not be their only passion.