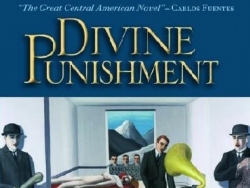 0
Castigo Divino, by Sergio Ramírez, appears in English for the first time

Divine Punishment  was published back in 1988 and has been translated into many languages, but never before into English. Translated from the Spanish by Nick Caistor, it is launched today by McPherson & Co. This publication will be celebrated with appearences of the author and translator at the Americas Society in New York City in association with the Instituto Cervantes. Tomorrow there will be a panel for Sergio at the Instituto Cervantes. Both events are officially part of the PEN World Voices Festival.

Upon its original publication, Carlos Fuentes declared Divine Punishment to be the quintessential Central American novel. In this, the greatest work of a storied literary career, Sergio Ramírez transforms the most celebrated criminal trial in Nicaraguan history—the alleged murders in 1933 of two high society women and their employer by a Casanova named Oliverio Castañeda—into an examination of the entire Nicaraguan society at the brink of the first Somoza dictatorship. Passion, money, sex, gossip, political intrigue, medical malpractice and judicial corruption all merge into a novel that reads like a courtroom drama wrapped in yellow journalism disguised as historical fiction posing as a scandal of the first order.

“This is a big, beautiful novel –a compelling historical drama of competing narratives and colorful characters that is self-aware and tigned with black humor.” - Publishers Weekly