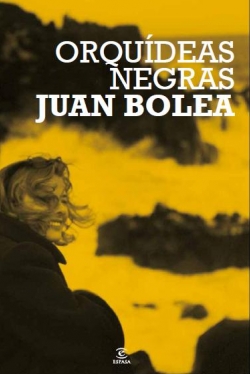 Year: 2010
Editorial: Espasa-Calpe
Language: Español, Catalán
Synopsis: Ricardo Dax lands on the island of El Hierro to study its seismic activity. Upon arrival, he lodges in a rustic and out-of-the-way cabin in the old scientific colony. His only neighbors are a biologist and a sculptor. Between Dax and Fagen, the sculptor, a curious and ambiguous relation strikes up and, over a bottle of vodka, while they discuss the enigmatic series of crimes that mysteriously befall the actresses that have played the role of Desdemona in Shakespeare’s Othello, who before being murdered, received a bouquet of black orchids from an anonymous admirer.

Apart from these odd neighbors, Ricardo Dax encounters another couple of neighbors, who live in a strange house carved out of rock. The house belongs to Leo Cosmo, a veteran film director now retired and who lives in isolation in the company of his wife, María Puerto. Ricardo first meets Puerto on one of the volcanic beaches and immediately feels a strong attraction for her. She invites him for a visit to her house where Ricardo meets Leo Cosmo. There Leo explains to him that he stopped being interested in films a long time ago, and that, he has presently embarked upon a very ambitious theater project: staging a new version of Othello, and that very shortly he will leave for Madrid to negotiate the means and support for his mise-en-scene. Taking advantage of Leo Cosmo’s absence, Ricardo and María surrender to their attraction and live a blissful romance. She reveals to Ricardo the man that Cosmo really is how he abuses her, and how she has no other choice than to give in to his constant scorn and blackmailing. A mixture of passion and pity fills Ricardo’s head with the idea of the crime. When Cosmo returns from Madrid, the plot to murder him will have already been hatched by the two lovers, who only await an opportunity to carry it out. From that moment on, the events accelerate towards a totally unexpected denouement…