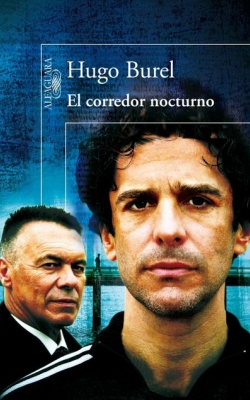 Year: 2005
Editorial: Alfaguara
Language: Español, Catalán
Synopsis: Under the directorship of Gerardo Herrero, the cinematographic version of “The Midnight Runner”, a novel published by Alfaguara began filming in Buenos Aires. “The Midnight Runner” is the story of an obsession: to run non-stop to reach nowhere. Its main character, a manager at an insurance company in Montevideo, does it to rid himself from the stress of work. At an airport’s waiting lounge he meets a mysterious and perturbed man who introduces himself as a benefactor. From then on, his life will gravitate towards an ambiguous territory where the every-day certainties vanish—and running becomes useless.

This intense and mysterious novel, recreates the fantastic myth marked by facts that are, both trivial and sinister: it all depends on the lens by which it is seen through; from the consciousness by which it is judged.

Hugo Burel conceived this exciting story that raises the issue of power struggle, hypocrisy and the moral crisis, but goes even further by proving that, accidentally, our familiar world, our daily life, can crack and come tumbling down, obeying to that set of uncertain rules that we call, with resignation, chance.