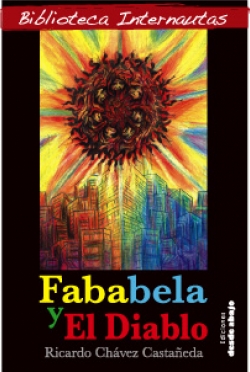 Year: 2009
Editorial: Ediciones Desde Abajo
Language: Español, Catalán
Synopsis: It’s been a long time since the Devils last appearance in literature, and the rarest of all visits are on the pages of a children’s book. In Fabela y el Diablo—as the title indicates—the primary event of the story is the Devil’s visit. On the border of two mirroring cities—“Faba” and “Bela”—, during such an unfavorable season for anything diabolic to occur as that of Christmas, a child, white as salt, sad as eternity and rich as the bottom of the sea, the Devil arrives.

From that moment onwards the child returns, in the beginning only once a year, then every six months and finally every three months, to witness the ongoing disputes amongst the two cities over their construction of towers that will reach the sky. Only one young man and one young lady—each a citizen of the opposing cities—have realized that this crazy competition for being the first to reach the sky is going to lead them all to tragedy. Together they try to put a stop to the disputes, though both suffer from strange ailments: the girl cannot be exposed to the sun’s rays without fraying her skin, and the boy is cursed with the ability to draw or paint the souls of people, he is unable to paint their physical body, he only sees their defects; those weaknesses through which their souls are lost.

Will the young visitor, who is none other than the fallen angel—the Devil himself—return to the sky, or will the two young citizens be able to prevent him from completing his diabolical plans? This is the dilemma which leads them all to an unimaginable outcome.