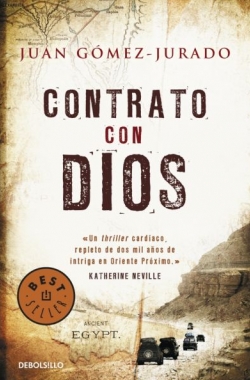 Year: 2007
Editorial: Ediciones El Andén
Language: Español, Catalán
Published at: Rowohlt (Germany), Pegasus Yatincilik (Turkey), Objetiva (Brazil), Simon & Schuster (USA), Politikens (Denmark), Dioma (Indonesia), Sonia Draga (Poland), Hermes (Bulgaria), Orion (UK), Gyldendal Norsk (Norway), AW Bruna (The Netherlands), Plon (France), Longanesi (Italy), Otava (Finland), Laguna (Serbia).
Synopsis: Financed by a mysterious American multi-millionaire and manned by an old Jewish archaeologist, a secret expedition delves deep into the Jordanian dessert. With the help of two sketchy maps, the exact location where the Ark of Covenant was buried by the Jews that saved it from the destruction of the Second Temple is pinpointed. One of these maps was amongst the Qumran scrolls, the other was found hidden in the inside a candle kept by a Jewish family for centuries and stolen by a sadist doctor during the Nazi occupation of Austria. The “Mosses Expedition”, which is about to make the greatest archaeological discovery of all times, is infiltrated by the Vatican’s secret services, the Mossad, and by a mole from the Islamic Fundamentalism. A Spanish journalist has the story’s exclusive rights and is part of the expedition.

“The Moses Expedition delivers the best of the literary suspense and international intrigue genres with breakneck thrills and twists, and Gomez-Jurado enriches every page with a sophisticated portrayal of characters and a deep respect for history. This fantastic novel will have your brain working overtime and your bedside lamp on into the night”.

Author of the Dante Club

"History, secrets, conspiracies, action, adventure, this is my kind of story. The Moses Expedition is fraught with intrigue and plot twists galore. Juan Gomez-Jurado is a writer who knows how to deliver exactly what readers want. He's in the top echelon of the world's thriller writers and well worth a look. Settle back and savor this perfect piece of entertainment."

"A thrilling quest novel by a terrific new talent... this tale is going to cost you some serious sleep."

KATHERINE NEVILLE, #1 New York Times bestselling auhor of THE EIGHT and THE FIRE

Juan Gómez-Jurado has created a true masterpiece. The Moses Expedition is a brilliant thriller - sharp, suspenseful, and engrossing. This is what great thriller writing is all about and why Jurado has vaulted to the top of my list of must-read authors!