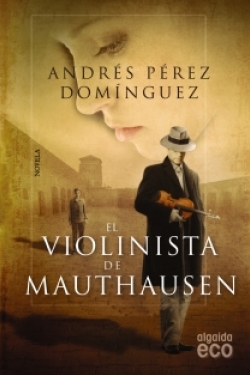 ”Once upon a time on subway station I saw a young couple dancing a waltz on the platform, without music, unaware of everything, as if no one were looking at them.

The image was so powerful that it kept haunting me until I wrote this novel: that couple lived in Paris, in the spring of 1940. They were about to marry, but the Wehrmacht invades France and, as he is an exiled Spanish Republican, the Gestapo arrests him and he will be sent to the Mauthausen death camp. She will collaborate with Allied secret services, willing to do anything to try and save the life of her fiancé.

Amongst them, a German engineer who has resigned to his work in Berlin so as not to collaborate with the Nazis and has devoted his time to travel throughout Europe with a violin under his arm.

Very soon, the life of all three will be interwoven for good.

The Violinist of Mauthausen is their story.”

German occupied Paris, Berlin in ruins after the Second World War, and the Mauthausen’s Death Camp, will be the main settings where this wise mix of intrigue, adventure, spying, history and romance, which rivets the reader from the very first page takes place.

A novel which has been awarded the XLI Ateneo de Sevilla Prize by absolute unanimity.

”A writer capable of creating stories which seemed foreign to Spanish fiction, without either abandoning the identifiable settings or the effort at achieving a decidedly literary heartbeat.”

”One feels that one no longer will be able to live without his fertile and fine writing.