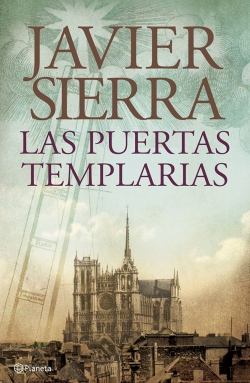 Year: 2000
Editorial: Ediciones Martínez Roca
Language: Español, Catalán
Published at: Sonia Draga (Poland), Planeta (Spain), Marco Tropea (Italy), Blanvalet (Germany), Ikar (Slovakia), Hermes (Bulgaria)
Synopsis: During a satellite exploration of France, the cameras of the satellite ERS-1 detect a strange energy source that comes straight from the centre of several French cities. One of the engineers of the European Space Agency in charge of the mission, Michel Témoin, soon discovers the reason: The source of the energy turns out to be the great Gothic Cathedrals that wee built in the French region of Champaigne during the 13th Century; and, now, something has ‘activated’ them…

This gripping novel explains the links between the Templar Knights, the Gothic Cathedrals of France and a secret plot: seen from above, the different cathedrals trace the pattern of the constellation Virgo, but why?

Originally published in Spain in the year 2000, this novel unveils the secrets that surrounded the creation of the Order of the Templars, nine centuries back in history. “Las puertas templarias” has been constantly reprinted since its first release, and it consolidated Javier Sierra as one of the finest writers devoted to historical mysteries and enigmas.