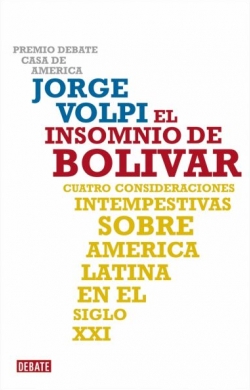 In “Bolivar’s Insomnia”, Jorge Volpi travels with the reader through the Latin America of the bicentenaries, in search of the questions of what has become of and where is the continental project that once upon a time the Libertador dreamt of. Starting from his personal experience as a Mexican who discovered late in life his condition of Latin American, Volpi weaves four reflections beginning with the last Bolivar, whose dream of a united Latin America has failed.

In the first consideration, Volpi travels the four cardinal points of America which take him as a witness to strikes, demonstrations, and tributes to great men, where the multiple aspects of the region surface, allowing him to ponder the content and relevance of the very concept of Latin America itself. In the second one, he broaches the political history of Latin America, from independences till the difficulty of democracy consolidating in the region, and the third meditation tackles recent Latin American literature: the problems of the divergent expectations of the editorial market and criticism, as well as the expectations of the new Latin American writers—all help Volpi to expose the end of a model of identity imposed from the outside. Here the figure of Roberto Bolaño, “the last Latin American writer”, stands out. In the last consideration, Volpi conjectures about the future of Latin America, scrutinizing the region from north to south. The analysis regarding present-day society and the potential scenarios of the immediate future lead to a reflection regarding bicentenaries and the evaluation that will entail, to close with an audacious exercise in futurology that anticipates, after much tension and conflicts, the continent’s unification by 2110.

“Bolivar’s Insomnia” covers, in an intelligent and seductive manner, the history of Latin America from its mythical past till its imagined future and contributes, with humor, irony and great literary work, to the understanding of the American continent.