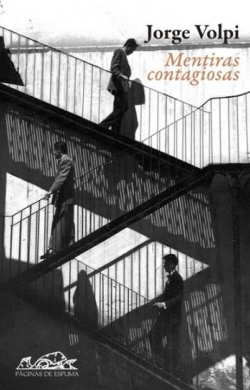 Year: 2008
Editorial: Páginas de Espuma
Language: Español, Catalán
Synopsis: Half-way between essay and fiction, “Contagious Lies” is a collection of texts which explore the Novel’s limits, and dissects the possibilities of survival, challenging those who consider it a useless entertainment or certify its inevitable and forthcoming demise. Novels behave like viruses or parasites: their aim is too contaminate the greatest possible number of readers and to achieve this, they are condemned to passionately compete amongst themselves. Since the appearance of “Don Quixote”, novels infect and contaminate and sometimes turn into real epidemics. Provocatively playing with this evolutionary approach, Volpi places these literary organisms under the microscopic lens with the ultimate aim of studying their nature and reveal their enormous power of adaptation. From Orson Welles neurotic obsession with Cervantes’ characters, to the ties between novel and science, and to the ironic unmasking of academic studies, to the ferocious condemnation of clichés, “Contagious Lies” examines the not-always simple relationship between fiction and reality. In his reflections regarding the genealogy of Latin-American narrative, from Rulfo to Pitol, and from Fuentes to Bolaño, Volpi declares himself an enemy of any kind of border and ventures to imagine the lot of future generations.