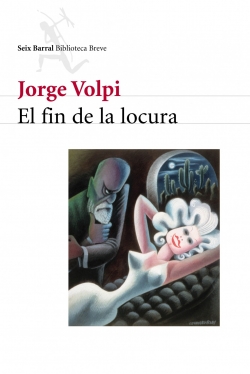 Year: 2003
Editorial: Seix Barral
Language: Español, Catalán
Synopsis: Who is Aníbal Quevedo: a madman, a knight-errant of the revolution, or one of the most important intellectuals of the second half of the 20th century? El fin de la locura (The End of Madness) is not only a political novel, but also a novel of adventures, and a criticism of the intellectual world. It is, above all, a cruel metaphor of the fate of the Left, the passionate tale of the fall of revolutionary utopia.

In the revolutionary Paris of May 1968 Aníbal Quevedo meets some of the most important French intellectuals -such as Jacques Lacan, Louis Althusser, Roland Barthes and Michel Foucault. Then he begins a political adventure that will lead him to join the Proletarian Left, to make a stage in Cuba to be trained as guerrillero, to psychoanalyze Fidel Castro, and even to travel with him to Chile and meet Allende. After twenty years, Aníbal returns to a Mexico ruled by the neoliberal President Carlos Salinas de Gortari. There he meets Rafael Guillén long before his transformation into Subcommander Marcos, experiences the seduction of power and is carried away by a scandal that will put an end to his madness.

After being internationally recognised for his previous novel, En busca de Klingsor, Volpi proves once again that an intelligent novel can also be enthralling and fun.